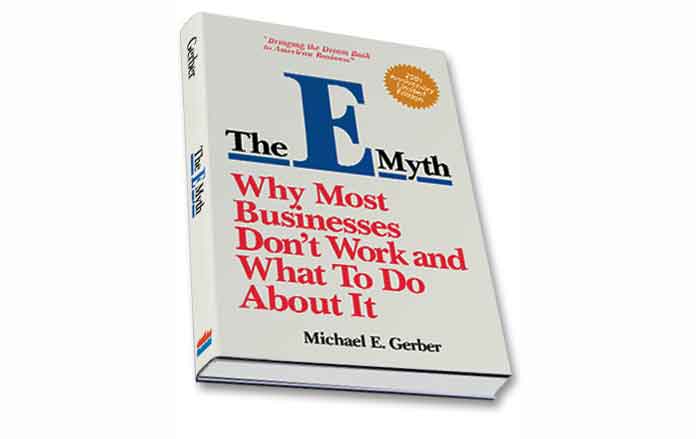 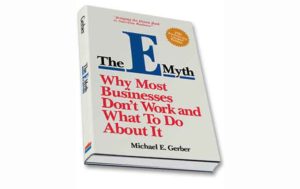 Quick Takeaway: The E-Myth Revisited is a nuts-and-bolts book about small business management and entrepreneurship. After craftily dispelling certain “myths” about business ownership and identifying and explaining key components linked to successful enterprises, Gerber wraps it up by considering meaning in the big picture.  He highlights how owning a business can act as a bridge between our internal sense of self and the rest of the outside world.

Why I read this book: It was suggested in The 4-Hour Work Week by Tim Ferriss

Notable Quote: “If your business depends on you alone, you don’t own a business, you own a job.” – Michael E. Gerber

Book Report: Michael Gerber did an amazing job weaving very different ways of communication through The E-Myth Revisited, so his reader is at some points gleaning practical information and is at other points being shown how human business owners are. The book is one part text book and another part narrative. The small business and entrepreneurship messages are extremely clear, but the book also explores the emotional thought process of a struggling entrepreneur who seems to be wondering why she started a business in the first place.

Gerber points out there is a myth that there is something special, intelligent, and unique about entrepreneurs, but this really isn’t true, and by following a very clear step-by-step development process, anyone willing to give time and attention can flourish in business ownership. Gerber also states early on that a business is nothing more than a reflection of who the owner is.

Another concept in The E-Myth Revisited is that ”everyone who goes into business is actually three-people-in-one: The Entrepreneur, The Manager, and The Technician.” With this in mind, the Entrepreneur is the visionary, dreamer, and lives in the future of possibility. The Manager is pragmatic and provides order, and the Manager lives in the past, resisting change. The Technician is the one who gets things done, tinkers with things, and is always busy. The Technician lives in the present. According to Gerber, there is always a constant struggle for control between these three roles, and unfortunately, his experience leads him to believe that “the typical small business owner is only 10 percent Entrepreneur, 20 percent Manager, and 70 percent Technician.” This imbalance leads to more work rather than more success, and the owner realizes that he doesn’t own a business, he owns a job.

There are quite a few other powerful concepts highlighted in The E-Myth Revisited, but another main concept is the flow of a business from Infancy to Adolescence to Maturity. Basically, Gerber believes that if a person wants to build a large company, the person should not think about the company as it is in the moment, but rather as the owner envisions the company. From the very start, the entrepreneur should create a robust Organization Chart, for example, even if that means that his or her own name is placed in ten different roles on the chart at the beginning. Also, there is a critical point which Gerber named “Beyond the Comfort Zone” at which time the owner has to deal with a loss of control because the company can’t be managed by a single person, and this is a huge point leading into the next topic called The Turn-Key Revolution.

The Turn-Key Revolution proposes that a successful company should be created out of order rather than chaos, and the owner should look at his or her company as a prototype that could be replicated easily without the owner, so the owner is working On the company rather than In the company. Gerber doesn’t stop there, however. He clearly explains a process to do just that through three distinct yet integrated activities: Innovation, Quantification, and Orchestration. The creativity, tracking of everything, and elimination of choices once order is found are the backbone of successful companies.

Marketing is one of the last major components in The E-Myth Revisited, and Gerber highlights objective things to think about and strategic approaches to marketing including the idea that people don’t buy products, they buy feelings and much more. Gerber also gives us a nice glimpse of his life as a young adult who drifted around a bit with a beard and a guitar and who ended up in Silicon Valley only to realize that not only did he know nothing about what was happening in technology, but none of those working in the tech revolution did either. His ah-ha moment was a changing point in his life, and one that really humanized the way Gerber looked at systems (including businesses).

At the end of the book, after learning all about systems and processes, and success formulas, the reader is taken to the idea that business is a game, and businesses should be created with rules that make the game worth playing. In the end, a company is a representation of the individual who created it, and this can be a beautiful thing. Gerber points out that the first order of business for his book isn’t your business. You are. He writes that before business owners determine exactly what they will do, they should ask themselves the important questions such as: What do I value most? What do I want my life to look like? Who do I wish to be? These answers will help the owner design the best possible game for their life which ultimately will also become a reflection of who they are.