Shoe Dog; Memoir by the Creator of NIKE 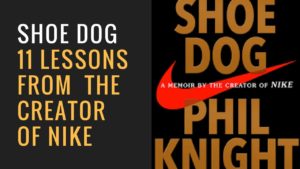 Shoe Dog; A Memoir by the Creator of NIKE, by Phil Knight

Quick Takeaway: Shoe Dog, A Memoir by the Creator of NIKE, by Phil Knight dispels any thoughts that America is an entrepreneurial Shangri-La where a good idea turns to money quickly and easily. Rather, Knight claims that entrepreneurs are always outgunned and outnumbered by naysayers and businesses trying to thwart success with “No’s” and other roadblocks. Shoe Dog is a wonderful book showing Phil Knight’s uphill battle that turned a crazy idea within the head of a young man searching for meaning into a megabrand, multi-billion-dollar company.

Why I read this book: It was given to me by my brother-in-law, Chris Payne

Notable Quote: Fighting not to win, but to avoid losing is a surefire losing strategy. – Phil Knight (I slightly paraphrased this for context)

Book Report: Shoe Dog is, simply put, a very fun read. This memoir does a great job highlighting the adventure that is the life of Phil Knight, creator of Nike. The book highlights Knight’s desire to explore as a young man, and it highlights his manic drive for success, but the book is also written with a humble attitude that makes the reader root for the underdog, forgetting that Knight succeeded in the end, becoming one of the richest individuals on the planet.

Another interesting aspect of Shoe Dog is the reader learns how much happened before Phil Knight’s shoes were even called NIKE. We learn about his multiple travels and the motley crew that helped Phil propel his idea into the household name Nike is today. The reader also learns about some of Phil’s challenges. He failed at multiple sales jobs, but he succeeded in selling shoes. Why? Because, according to Knight, he realized that he wasn’t selling. He believed in running, and he believed that if more people ran, the world would be a better place, and he believed that his shoes were better to run in. Knight writes, “People, sensing my belief, wanted some of that belief for themselves … Belief is irresistible.” And, this belief can apply to anything.

Belief alone doesn’t guarantee success, however. In Shoe Dog, the trials of Knight’s extremely difficult dealings with Japanese Corporations and American banks shows that any wavering would certainly lead to failure, but fighting through overwhelming obstacles is necessary to win. Many times, Knight’s company was on the cusp of failure, but with a passion and a lot of hard work, he was able to keep it alive.

While reading Shoe Dog, it was fun to follow the path of a never-give-up entrepreneur who overcame financial, cultural, external, and internal challenges, and Knight’s memoir definitely wasn’t self-glorifying, but rather it feels like it was written to inspire not only other entrepreneurs but also athletes, painters, novelists, or anyone else with a vision. Near the end of his book, Knight encourages young men and women not to settle for a job, profession, or career, but instead to seek a calling. Knight writes, “Even if you don’t know what that means, seek it. If you’re following your calling, the fatigue will be easier to bear, the disappointments will be fuel, the highs will be like nothing you’ve ever felt.”

At the end of Shoe Dog, as Knight reflects on his book, his life, his adventure, his success, he does reveal one secret regret—that he can’t do it all over again.